Both boys got their pets for their tenth birthdays (we have a list of things that happen at various ages, getting a pet is the privilege that comes with turning ten, though there are some provisos about being responsible).

Blizzard, the rabbit, is still rather wary of children. Eldest likes to sit in the rabbit run, reading a book. If he sits for a while, Blizzard will hop onto his lap for a stroke. He is the softest rabbit I’ve ever touched. Eldest loves him, and the quiet wariness suits a pet belonging to Eldest.

Middly’s rats are completely different. The day we got them, I told the boys to sit quietly and let the rats explore in their own time. I said they shouldn’t stroke them, at first, they should give the rats time to get used to their new home. The rats instantly ran up to the boys and climbed all over them! They have never been afraid in the least.

Middly’s rats scamper out to greet us every time we go near them. They love new things and new people. They’re perfect pets for our sociable – and sometimes rather excitable – Middly.

The pets have reflected our boys’ feelings, given them a new way of talking about emotions. Eldest can see how too many visitors make Blizzard withdraw to his hutch, and he can tell us that sometimes he likes to withdraw to his room when we have visitors. Middly’s watched his rats get so excited over a banana that they fall off the table; he can see what over-excitement looks like from the outside and relate it to how he feels at times.

Talking about the pets’ emotions on moving house helped us to explore the boys’ feelings as well.

The pets can be an easy topic of conversation, when things are strained at home. It’s easy to get a laugh by reminding Middly of the time one of his rats climbed in my cold mug of tea. Even if Eldest can’t accept a nurturing gesture from me, he can take a stalk of broccoli for his rabbit, and know that I am thinking of him. At times, the pets can be distractions from our stresses, or play substitute for the care I want to lavish on the boys. They are a shared love for us, demanding less in the way of relationships than people do. Loving the pets is uncomplicated.

Unfortunately, though rabbits live eight to twelve years, pet rats only live two to three years. So, earlier this year, Middly was the first of our children to lose a pet. 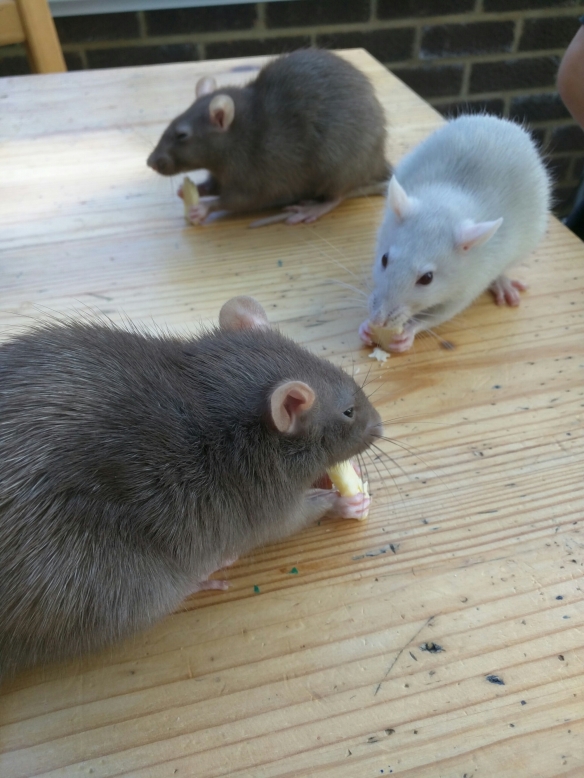 One of his rats – the white one, named Nippur – got a chest infection. We took her to the vets, but they weren’t able to save her. In the end, it was decided that Nippur should be put down. We buried Nippur under an apple tree in the garden. I said a few words about what a good rat she had been.

The boys have all dealt with this little loss in their own way. Youngest has found it easiest to talk about what happened and how he feels. Middly’s accepted some hugs. Eldest was rather sombre.

Saying goodbye to Nippur has meant that she has passed from part of our family to part of our family story. She is a shared memory now, a part of that web of shared experiences that makes us who we are. Having pets has drawn us closer.